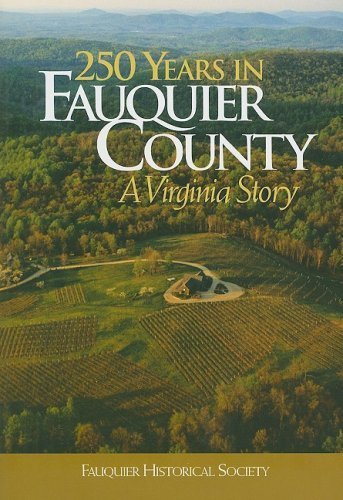 Beginning with the early interactions between Native Americans and European explorers and settlers, this history traces three and a half centuries of change in Fauquier County, Virginia. Commissioned by the Fauquier Historical Society to commemorate the county’s 250th anniversary, this engrossing narrative tells the story of the men and women, black and white, who built the region’s farms, plantations, schools, and churches.

Individual biographies are interwoven with a social, political, and military history of the American Revolution and Civil War, allowing crucial events in the county’s history to come alive. This book also explores Fauquier’s depressed economy after the Civil War and shows how the area’s location and natural beauty drew wealthy outsiders to purchase estates in the early part of the twentieth century. After midcentury, the enormous expansion of the Washington suburbs ignited a heated and ongoing debate over the county’s position on growth and development.

Related here is the fascinating story of a historically significant county. The volume has more than two hundred illustrations, some displaying the county’s stunning beauty, which enhance the book throughout.

Kathi Ann Brown is an independent historian based in Charlottesville, Virginia. Her clients include Marriott, Motorola, Friends of the National Zoo, the Federal City Council and many other corporations, museums and associations.

Walter Nicklin is a Warrenton native. His stories have appeared in national newspapers and magazines and have often included Fauquier County. He is the editor and publisher of The Piedmont Virginian.

John T. Toler has lived in Fauquier County for 50 years, and has researched and written numerous primary-source articles about the county’s history that have been published in newspapers and magazines. He is the editor of the Fauquier Historical Society newsletter, and frequently lectures on different aspects of the county’s colorful past.