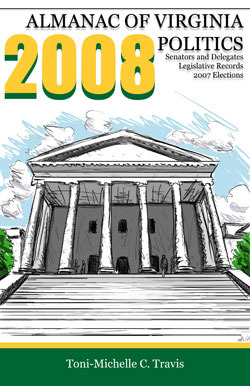 Published since 1977 and updated every two years, the Almanac of Virginia Politics is the leading source of information on the legislative process and key players in Virginia government. The 2008 volume is invaluable for those tracking the changing demographics that are bringing about historical shifts in the state. Illustrated here is, the much-discussed trend of Virginia’s moving from being a traditionally “red state” to one that’s more “purple,” which is reflected on the state level in the current makeup of the House of Delegates (53 Republicans, 45 Democrats, and 2 Independents) and State Senate (19 Republicans and 21 Democrats) as well as in the offices of governor, held by Democrat Tim Kaine; lieutenant governor, held by Republican William T. Bolling; and attorney general, held by Republican Robert F. McDonnell. The Almanac includes biographies of all members of the General Assembly, contact information for each, descriptions of their districts, election returns, and voting records, as well as a photograph of the member, all presented in an easily accessible format. Toni-Michelle Travis offers up the ultimate guide to Virginia politics, an invaluable reference tool for legislators, lobbyists, librarians, civic activists, teachers, students, and citizens.