In our current political and social environment, it’s no secret that truth, and the value of truth, is taking a beating. When truth is under attack, fallacious theories get repeated and “alternative facts” promoted, and when a preference for the spurious is favored, the search for truth becomes ever more critical.

Of course, it can be argued, and frequently has been stated, that truth itself is elusive if not unattainable. “There is no such thing as absolute truth and absolute falsehood,” wrote Henry A. Rowland. “The scientific mind should never recognise the perfect truth or the perfect falsehood of any supposed theory or observation. It should carefully weigh the chances of truth and error and grade each in its proper position along the line joining absolute truth and absolute error.” (Rowland, Henry A. “The Highest Aim of the Physicist,” Science, New Series, Vol. 10, No. 258, Dec. 8, 1899, 825-833, as of November 6, 2017: http://www.jstor.org/stable/1627046 )

Nevertheless, the job of historians, biographers, journalists, and others is to seek out the truth to the best of their ability, relying on facts. Facts can be discovered and brought to light, or manipulated and distorted; the difference is consequential.

This is why university presses exist: to reveal and elucidate facts and bring us ever closer to truth, or at least the threshold of truth.

In our new, forthcoming title, Playfair: The True Story of the British Secret Agent Who Changed How We See the World, author Bruce Berkowitz reveals a journey to uncover a truth that is often hidden, opaque, distorted, refracted by lenses of luck, fate, and personal conflicts of interest.

William Playfair, when he is known today, is remembered as the inventor of “statistical graphics,” including the line, bar, and pie charts that we still use regularly today (and built into Microsoft Excel). He’s a sometime-hero of the Infogeek community. Edward Tufte cited him extensively in The Visual Display of Quantitative Information, and called Playfair one of the great inventors of modern graphical design, who created the “first time series using economic data.” (Tufte, Edward, The Visual Display of Quantitative Information, Graphics Press, 1983, 9, 32-34, 64-65, 91-92)

Yet Playfair is generally not well known, some of his contributions remain largely forgotten or ignored, and his reputation has suffered with characterizations by historians that he was a lightweight, flimflam artist, or worse.

As Berkowitz writes: “One might say Playfair is the most famous man you have never heard of. He appears everywhere; he knows everyone. Time and again, he’s at the hinge point of history: the Industrial Revolution, the French Revolution, the founding of the United States, the birth of modern economics, the Age of Napoleon. Documents and artifacts link him to influential ideas and famous men. He’s the Forrest Gump of his era—except, unlike Gump, he’s brilliant, and, unlike Gump, he’s not just an accidental witness stumbling on the scene—he’s shaping and driving events.” (Playfair: The True Story of the British Secret Agent Who Changed How We See the World, page 334)

Berkowitz’s marvelous book is as much detective story as biography, a history of Playfair, his exploits and inventions, as well as a history of how the facts and truth about Playfair have been obscured over time.

The booby trap pinning Playfair as a blunderer provides an illustrative example. Playfair apprenticed to James Watt, inventor of the steam engine, who is frequently quoted in articles about Playfair as claiming: “I must warn you, Playfair is a blunderer.”

The often-repeated quote makes an early appearance in James Watt and the Steam Engine, by Henry William Dickinson and Rhys Jenkins, first published in 1927. Statisticians Patricia Costigan-Eaves and Michael Macdonald-Ross wrote an influential article about Playfair in Statistical Sciences that repeated the quote. But an examination of the original source, Watt’s letters, finds that the quote is a misleading snippet of what is, in fact, Watt’s recommendation that Playfair receive a promotion: “I would recall Playfair who can do part of the business, & I think now you are at home you can contrive to gett him proper assistance—I must warn you that Playfair is a blunderer but I dare say he will be assiduous and obedient and plain direction must be given him.” While the word “blunderer” sounds a bit damning, it was a frequent epithet employed by Watt, even to himself. (Playfair, 344)

Historian Randolph G. Adams said, “Each generation has to rewrite history for itself-and some­times from the same sources used by previous generations.” (Romney, Rebecca and J.P. Romney, Printer’s Error: Irreverent Stories from Book History, Harper Collins, 2017, 284, quoting from Lawrence C. Wroth, Notes for Bibliophiles in the New-York Herald Tribune, 1937-1947, ed. Richard J. Ring, Ascencius Press, 2016, 128) Indeed, in Playfair’s case, the various misquotations, passages taken out of context, and even complete fabrications began to accumulate over time, taking on a life of their own, seeping into scholarship as well as popular media.

Another example uncovered by Berkowitz regards Playfair’s involvement in the first major political scandal in the newly formed United States. The so-called Scioto Affair was a land speculation gone bad involving Thomas Jefferson, Alexander Hamilton, and George Washington. One historian, Ephraim C. Dawes, largely pinned part of the scandal on Playfair. Berkowitz describes the historical puzzle as a bit like Akira Kurosawa’s famous samurai classic, Rashômon, where the witnesses all believe and describe different versions of the same event. Berkowitz shows how Dawes, however, was the great-grandson of Manasseh Cutler, and used his version of the affair to clear his relative’s name. A later historian, Theodore Thomas Belote, made Playfair the heavy, as a confidence man, embezzler, and schemer, without relying on historical evidence. Berkowitz uncovers the real story, however, by carefully analyzing original source documents, digging up existing transcriptions of letters that have disappeared, and discovering an unlikely source, a bilingual French schoolteacher who wrote her thesis and, later, a book published in French, about the tangled Scioto affair.

L.S. Stavrianos wrote, “Each generation must write its own history, not because past histories are untrue but because in a rapidly changing world new questions arise and new answers are needed.” (Stavrianos, L.S., Lifelines from Our Past: A New World History, M.E. Sharp, 2004, 13).

The most remarkable discovery in Playfair is how the author uncovers evidence that William Playfair diligently proposed, planned, and executed the first covert operation in history to collapse a nation’s economy. By printing vast amounts of counterfeit assignats, the paper currency France had adopted to pay for their government and wars, Playfair hoped to dismantle the French economy, in 1793, hindering the French revolution on behalf of the British. 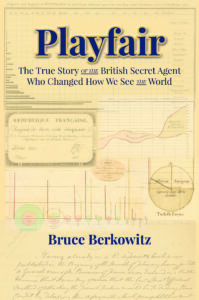 Uncovering the true story was a challenge: Playfair never bragged about it, he never even mentioned it in his unpublished memoirs, and Playfair pioneered and employed elements of espionage “tradecraft” often used today to hide his tracks. Berkowitz uncovered substantial evidence for the op during his journey of writing the book, including various documents and letters. Among them was Playfair’s original plan for the counterfeiting operation, written in his hand and dated March 1793, but lost until now, found among Playfair’s other correspondence to British Secretary of State for War Henry Dundas. Also among the evidence for the operation were physical specimens: three paper molds found at the Haughton Castle mill. Two of the molds were used for counterfeiting assignats, and a third used for making notes for Playfair’s Original Security Bank (a story in and of itself). Berkowitz’s book offers an amazing story of finding the molds, mislabeled and misplaced, in Newcastle’s Discovery Museum, as he describes, “…Like the last scene of Indiana Jones and Raiders of the Lost Ark: warehouse workers box the Ark of the Covenant, slot it into a vast sea of crates, and the credits roll as the artifact vanishes into the maw of a bureaucracy” (Playfair, 240).

Berkowitz writes about the importance of examining original source documents when uncovering facts and revealing the elusive truth to a story: “Transcripts [and citations] usually don’t include marginal notes, scribbles on the backs of documents, addresses, and postal markings, all of which can sometimes provide clues to piecing together a story. Besides, there’s nothing like handling an actual artifact. It’s a physical connection between you and the man you’re trying to figure out” (Playfair, 239). For this reason, Playfair’s endnotes include references not only to the citation used but also, wherever possible, to the original source document.

Berkowitz writes: “Analysis should also be cumulative. Everyone builds on others’ work, adding information and insight along the way. (And, when necessary, making corrections.) It’s all part of the process of creating knowledge. By making the source material easier to obtain, we hope to encourage others to follow up with their own research” (Playfair, 372).

The book has been an incredible journey, for the author and for our new, fledgling university press. We look forward to your comments and reaction.

Playfair: The True Story of the British Secret Agent Who Changed How We See the World, by Bruce Berkowitz, will be published by the George Mason University Press in November 2017.

Order from Amazon or from your favorite independent bookseller. George Mason University Press titles are distributed by University of Virginia Press and Longleaf Distribution.

This blog post is part of UP Week 2017: A Celebration of University Presses

Tools for Surviving in a Post-Truth World

The Struggle for Equality, Recognition, and Reward, by Athena Coustenis and Thérèse Encrenaz

Winning Hearts and Minds: Publishing that Matters, by Anne Brakenbury